His name is Dewey 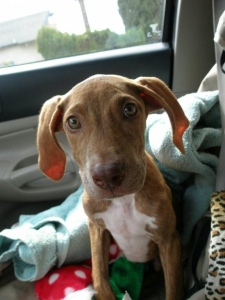 The Animal Control Officer led me down several hallways to a quiet area behind the main kennel banks. The echo of barking and whining faded behind us and all we could hear was the echo of our own footsteps. We came to a door with a small pan with an antiseptic-soaked towel, which we stepped in to remove any trace of contaminants from the soles of our shoes. Inside, the room smelled cold and sterile, all cement walls and floors, with few amenities in the kennels. Curled up in a ball at the back of the first kennel was a lanky brindle puppy, all bones, big eyes and huge floppy ears that stuck out at funny angles like the flying nun in a windstorm.

The ACO opened the door to the kennel and the puppy struggled to get up, head hanging low. Unfortunately his legs fell out from under him and he crawled quietly towards us on his belly. His eyes never left mine and I could feel the tendrils of his soul connecting with mine. I wanted so badly to reach in and pick him up, but he was timid and experience has taught me that he needed to make this journey through his own will or I would risk losing his trust. His painstaking crawl did finally end up in my lap where I could feel every bone in his body as he pressed up against me. His head tilted up and he continued to gaze straight into my heart, my soul, the core of my being. He seemed to want something from me and I swore at that moment , whatever it was, I’d give it to him. Once he was in my lap, he didn’t move and I consciously tried to will energy and health into his broken body.

His name was Dewey. Dewey had been turned into the shelter because he was sick and his owners didn’t want to or couldn’t care for him. He had fought hard and won the battle against parvo, only to come down with kennel cough and now the xrays were saying that his heart was becoming enlarged for unknown reasons.  He was classified a pit bull, but was obviously not, probably some sort of lanky loving plothound mix. I was in to evaluate him for a pit bull adoption program and, while we had connected at a level I didn’t even know existed in me, he was not a pit bull and I knew that I couldn’t pass him off as one to get him into our program, especially with untold medical expenses looming. We sat on that cold, dank shelter floor for 45 minutes. The ACO left and returned and finally, with a polite cough, noted that I seemed to have finished my evaluation. I wiped my tears, placed Dewey carefully on the threadbare towel in his kennel and followed the ACO out of the isolation ward, cleaning our soles on the astringent as we left. “We can’t take him into Pit Bull Rescue but please give me a couple of days to make some calls”, I pleaded. And calls and emails I made, dozens of them, before finding a group that agreed to do some diagnostics and determine the extent of his medical needs.

“No promises” they told me. The money could reach the many thousands and I understood their hesitation. But I had faith the money would be found somehow, somewhere. It had to be. I picked up Dewey from the shelter the very next day for his testing. I clutched him tightly as they handed him to me. He was only to leave for testing, however I knew that if I ended up bringing him back, he would not leave the shelter again. When I picked him up, his chest seemed much larger and, as I placed my hand there, I could feel the heat of his heart as if there were only a thin piece of tissue paper between my hand and his life source. He seemed so frail. I feared, as I placed him on the seat of my car that, if I stopped looking at him, he would die during our time together. I received a call from the shelter as I headed out, “take him immediately to the hospital. The xrays taken this morning show that his heart is expanding at an alarming rate.” It was rush hour and the 1.5 hour trip to the specialty hospital never seemed so long. I snapped several photos of him as I drove in case that was the last I saw of him. The whole time, I could feel his eyes on me, pleading.  His little legs trembled, his breath rasped, he sunk lower into the towels he was wrapped in, but his eyes remained firm. “I will fight if you will fight for me” he seemed to say.  I sobbed and promised him over and over that I would save him, that I loved him, that he was safe with me. I didn’t know if I was lying but I would be damned if he’d sense any doubt that I wanted to be his angel. If he was to die that day, he would know he was loved.

The vet techs rushed him to the back of the hospital where I could not go and the next days were a blur. The heart specialist was on vacation and the best they could do was to keep him alive until she returned.  They sent the surgeon his xrays via email. She responded that he had very little chance of surviving a surgery but said that she wanted to try and that she wouldn’t charge the rescue if she failed. I pinned a photo of Dewey everywhere in my life – my computer, my dashboard, my kitchen cabinets. Every time I saw it I prayed. I prayed like I never had before. His eyes burned into me, reminding me of my promise to him. I called the hospital every day, twice a day. Every time my phone rang I jumped and tears sprang to my eyes. Thankfully, I never got the dreaded call that he had passed. 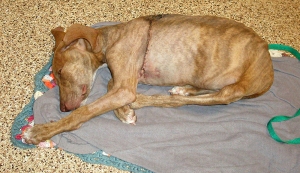 The surgery was a success – a grueling four hours, but a success. Holes were patched and swelling brought down. The surgeon was thrilled, the staff members who volunteered their time after hours as techs were thrilled, the rescue group (despite the incredible financial hardship that my project had thrust upon them) were thrilled. How could we all not be? Dewey was a miracle. Parvo, kennel cough, a heart defect, and still his spirit refused to wane. I visited him as soon as I was allowed. They wheeled him in to me on a cart and I gasped. He had been emaciated before but now he truly was a skeletal shadow. His legs were all folded in and it seemed his body was one huge set of stitches.  Half sedated and in some pain, his eyes were half closed – those eyes that had let me see his soul. That first visit I felt empty that I could not see into that special place he had reserved just for me. His tail slapped the blanket feebly when he saw me and he tried to lift his head. I had to turn my head so he would not see me cry. I needed to be his strength.

I visited Dewey several more times in the 3 weeks he was in the hospital. Each time he seemed a brand new miracle. His eyes and, with them, his spirit returned. That same fortitude that saved his life initially now seemed to take over his body. He began to put on weight, to walk without staggering, to wag without ceasing and quickly endeared himself to all the staff who still viewed him as their own personal miracle. The day I picked him up, he literally bounded out of the back room. Another person in the waiting room commented that he certainly seemed happy and asked what he was in for. “His life was saved 3 weeks ago”, I replied. The person turned their head as he drew closer and they could see his enormous scar. What they missed seeing is the real heart and spunk that had moved into the place where the pain and sickness had been. 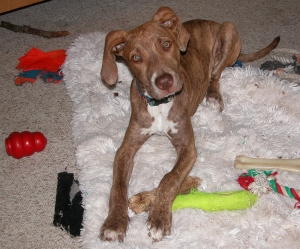 I fostered Dewey for another 6 weeks before he was adopted by a cardiologist and a pulmonologist who looked at his charts and knew beyond a shadow of a doubt that they were adopting a miracle. I check in on my miracle from time to time. He’s an adult now and goes everywhere with his parents. He hikes and plays in the snow and swims and barks at birds just like a normal dog. Well, I guess he really is a normal dog now… except to me…

This entry was posted in Animal Rescue. Bookmark the permalink.